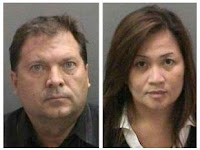 Eric Wayne Helgemo, 50, of Vista, California and Maria Lorena Vega Yarrish, 40, of Buena Park, California, CFO and Controller, respectively of Pacific Polymers Inc., were sentenced yesterday for their role in an embezzlement conspiracy that bilked the company out of more than $1.5 million. Helgemo (left) was sentenced to 10 years in prison and Yarrish (right) was sentenced to 8 years in prison. They were each also ordered to pay a fine of $3 million. According to authorities, the pair issued more than 800 fraudulent paychecks to themselves over a period of about 5 years, from 2003 until 2008. Specifically, Helgemo received 593 fraudulent payments for more than $1.1 million and Yarrish received 229 fraudulent payments for more than $340,000. The embezzlement was discovered after the company was sold and Helgemo and Yarrish were let go and an audit of the company's books was conducted. Cor Claus, Pacific Polymers former owner, claimed that the company suffered a loss of as much as $7.5 million as a result of Helgemo's and Yarrish's thefts. The pair were originally charged last October with numerous counts of computer access and fraud.
Read the story here, here and here.
Read the original Orange County DA's announcement here.
Posted by Chris Marquet at 3:43:00 PM

Yeah, well they recently sent a 25 year old mother of two to prison for 10 years in Oklahoma for selling a dime bag worth of pot as her first offense. She worked at an old folk's home. She got more time then the woman who embezzled millions in this story. Kind of sad the mental illness in the judicial system over marijuana isn't it?