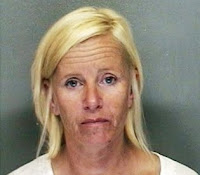 Cynthia Goldberg, aka Cynthia Kussy, aka Cynthia McDonnell, 47, of Westborough, Massachusetts, was found guilty Friday in a bench trial of embezzling $752,245 from FSL Associates, an environmental engineering firm located in Brighton, where she had been employed as a bookkeeper. Goldberg was indicted on 20 felony counts including 10 counts of larceny, five counts of making false entries into corporate books, and five counts of misuse of a credit card. According to authorities, Goldberg's thefts spanned approximately 5 years from 2002 until she was fired in 2007. Goldberg obtained three credit cards in the company name and its CEO and made numerous fraudulent purchases of goods from such retail stores and other personal expenses, such as PETCO, Victoria's Secret, Banana Republic, Wolfer's Lighting, the Ritz Carlton hotel and several area tanning salons and limousine companies.

Read the story here, here and here.
Watch a video on the story here.
Read the Suffolk County D.A.'s office announcement of her indictment here.
Posted by Chris Marquet at 10:54:00 AM

Most Popular Posts This Month