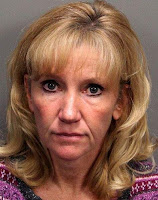 Mary Anne Mattoon, believed to be in her late 40s, of Reno, Nevada, was sentenced to 20 years in prison for embezzling at least $400,000 from NevDex Properties, where she had been employed as office manager. According to authorities, over a six year period between 2002 and 2008, Mattoon altered the company payroll to pay her additional salary - as much as $90,000 more in one year. Mattoon reportedly spent the stolen money on personal luxury items, shopping sprees, a horse trailer and a motorcycle business she started. Meanwhile she convinced company owners that they had to lay off workers due to the poor finances of the company. Separately, in 2008, the company won a civil judgment against Mattoon odering her to pay more than $1 million back to the company. Meanwhile, the court in the criminal case ordered Mattoon to pay $408,500 in restitution. The state filed criminal charges against her in July 2010.