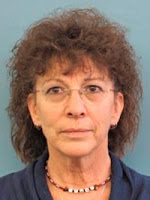 Gayle J. Tatman, 59, of Grove City, Ohio, was sentenced to 2 years in prison for embezzling nearly $213,000 from the Grove City Food Pantry for which she had served as treasurer. According to authorities, Tatman siphoned the funds, amounting to half of the pantry's cash, over a period of 7 years, from May 2002 until April 2009. Tatman's scheme involved forgery of checks and at least four of the organization's bank accounts, including one that was supposed to have been closed out years ago. She plead guilty in a plea agreement in January to one count of bank fraud.