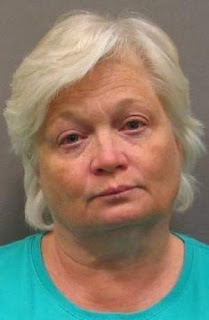 Joyce Bidnick, 58, of New City, New York has been charged with embezzling more than $100,000 from the New City Little League for which she had served as volunteer treasurer. Bidnick reportedly is seeking counseling at the county mental health crisis center. Bidnick is accused of writing checks to herself for nearly 8 years, since 2003 and then falsifying the League's books to hide her thefts. Meanwhile a forensic audit is still in process.


Read the story here and here.

Update (5/24/12): Bidnick has pleaded guilty to what is now understood to be more than $400,000 from the New City Little League.  She allegedly wrote numerous checks made unauthorized withdrawals from the league's accounts.
Posted by Chris Marquet at 3:28:00 PM

I hope they throw the book at her! Stealing from children, how disgusting.... She looks smug even in her mugshot! 5-15, hoping for 15!

Know the family personally, their all crooks! They should all be implicated, her, husband, AND son, they all had a hand in it!

How did you find our there was a possibility of fraud or miss managing the leagues funds? what steps did you take to uncover her doing? I suspect our league is misusing funds how do we uncover