Texas Woman Sentenced To 25 Years For Embezzling More Than $1 Million From Church & 2 Charities; Has 2 Priors 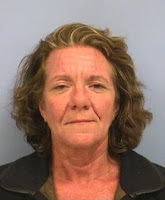 Louanne Aponte, 52, of Austin, Texas, was sentenced to 25 years in prison for embezzling more than $1 million from Family Connections, a child care services non-profit, for which she had served as executive director. She also took funds from the Texas Association of Child Care Resource and Referral Agencies and the Hyde Park Christian Church, where she had served as treasurer, according to prosecutors. When a state audit found that Aponte had falsified records, she reportedly fled to Venezuela in February 2010, but returned six months later when she was arrested. Aponte's now estranged husband, Marco Aponte, 48, was charged with money laundering. According to reports, some $2 million was tracked going into accounts held by the Aponte's over a period of 7 years. Louanne Aponte, formerly known as Louanne Shetter, was twice convicted on embezzlement charges in the 1980s, according to media reports.