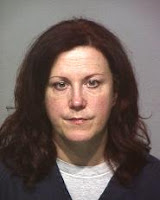 Mary Radiske, 47, of Thiensville, Wisconsin, has been sentenced to 5 years in prison after pleading guilty to charges she embezzling at least $617,432 from the Wisconsin Kitchen Mart where she had been employed as its longtime bookkeeper. According to authorities, over a five year period from 2005 until early 2010, Radiske wrote at least 79 checks from company coffers, made out to her husband, forging the signatures of the owners and depositing them into her own accounts. At her sentencing hearing, Radiske reportedly claimed she stole the money to "keep her husband happy." Randall Radiske, 47, has not been charged in the case and investigators do not believe he had a part in the theft. Randall Radiske has since filed for divorce. Mary Radiske must also pay restitution of $554,000.