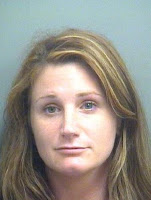 Heather McNally, 38, of Norwood, Pennsylvania, pleaded guilty to charges she embezzled $151,201 from Caleco Inc., a real estate agency where she was in charge of distributing commission checks. Meanwhile, McNally's ex-boyfriend, Theodore C. Delikat, 31, of Brookhaven, Pennsylvania, pleaded guilty to similar charges for his role in the scheme. According to authorities, McNally wrote checks from company coffers which Delikat cashed and the two split the proceeds. McNally was sentenced to to 11½ to 23 months in prison and Delikat was sentenced to 10 to 23 months in prison. The scheme reportedly spanned a period of more than two years, from 2007 until early 2010. Some of the checks McNally wrote out to her friend, Gina Renee Birzes, 36, of Media, Pennsylvania. Birzes (pictured here) was also charged in the case. She was arrested in Florida and appears to have some other criminal issues in that state.