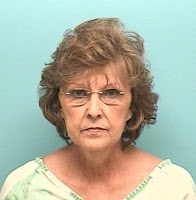 Patricia Mancuso Janowski, from Spring, Texas and who just turned 62 years old, was arrested last week and charged with embezzling more than $1.5 million from Cape Software, Inc., where she had been employed as a bookkeeper and secretary. According to authorities, over more than an 8 year period, from May 2002 through September 2010, Janowski electronically transferred company funds into her own accounts by manipulating the payroll and disguising the transfers as "vendor payments." Media outlets have reported that Janowski gambled much of the stolen funds by compulsively playing the video poker games at nearby Klein Food Mart. Last November, Cape Software filed a civil lawsuit against Janowski and her husband, Leo Janowski Jr., 62, in an effort to recover the monies.